The City of Ipswich is a local government area in Queensland, Australia, located in the southwest of the Brisbane metropolitan area. Ipswich's River Heart Parklands brings alive the Bremer River encompassing 1.5h of land which has been transformed into a widely recognized and commended leisure facility.

The previous lighting at the Parklands comprised of 100W sodium luminaires which were both inefficient and costly to maintain. Thorlux proposed the installation of 52W Juno-C luminaires finished in RAL7016 to match the poles. The primary objectives of the new lighting scheme were to improve lighting levels and to reduce energy usage and maintenance costs.The Juno C is a high performance offset mounted luminaire with forward light distribution and zero upward light. A discrete sensor integral to the luminaire monitors ambient light and presence ensuring that the area is only illuminated when occupied and that the lighting is turned off during daylight hours. 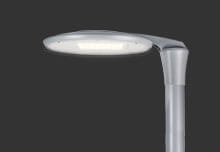 SYSTEMS AND SERVICES USED IN THIS PROJECT